I want to give Oracle money but I can't

Yeah, yeah, I know. I shouldn't even be thinking about using Oracle in the first place, but their compute pricing is just too tasty to ignore. You'd think that for a company that's well known for vacuuming as much lifeblood as it can from its customers, it would be relatively easy to give them money, but you'd be wrong.

Signing up initially seems pretty easy, until you get to the last step... 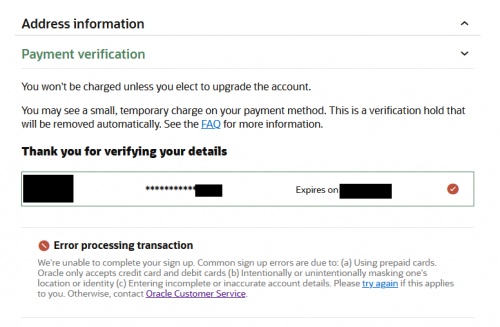 I tried with both of my cards, but no dice. I'm not permitted entry into this exclusive club. This is already ridiculous, because isn't your signup process and flow from non-customer to customer supposed to be as frictionless as possible? I wonder how many customers they've lost because of this.

Anyway, I actually emailed customer service, and they responded with this:

WHAT? I JUST WANT TO PAY YOU!

Moral of the story

We've got no money and no inventory.... there's still something we can do that's still a business somehow...

I'm sometimes baffled by how many businesses are out there that make the process of paying them insanely difficult. I've used restaurant apps before that have UI bugs that don't let you place an order, websites that set some random boolean on your account that doesn't let you transact and doesn't inform you until you contact customer service, stores that are constantly sold out of their flagship product, or just places in general that make the flow overly complicated. If you're running a business, for God's sake make it easy for the customer to give you money.