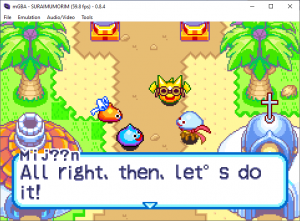 The Slime MoriMori Translation Hack is a romhack I've been working on which translates the original entry in the Rocket Slime series to English. For some backstory, "Dragon Quest Heroes" is a spinoff series from the mainline DQ games (which I've never actually played), of which only the second game was localized for North American audiences. The folks over at Aeon Genesis started work on this game but as of 2021, it's been unreleased for 13 years and it doesn't look like it's gonna come out. A group calling themselves "Team Rocket" successfully released a translation patch for the 3rd entry in the series, so all that remains is this one...

Currently I've made some progress on extracting/injecting the main dialog from the game, as well as a parser/encoder for the bytecode format they use for dialog. I ran the script through IBM's translation API and the results are pretty atrocious (but kinda funny) and at least the game is playable.

The officially localized game, Rocket Slime, took a lot of liberties with the script and is totally loaded with wordplay. My ultimate goal for this game is to re-do all the unlocalized graphics, rewrite the script with a healthy dose of silly word stuff at my discretion, and put out a patch.

If you're interested in checking out the totally ugly and unfinished machine translation, gimme an email!